Here’s the plan NOW! Let’s do it ourselves. We’ve been waiting for 30 YEARS  …

See what happened at the updated JANESWAY Panty Condom Links

How it is designed

Our Government & MANY private individuals funded Big pHARMA to CURE AIDS.
Much money was spent on research but NOT TESTED on WOMEN!
NO medicines were tested on women for about ten years of copious input of funds. So…..
THINK the WAR on WOMEN hasn’t killed too many ???

DE-Regulate Prevention Barrier Methods
Due to FDA / NIH /pharmaceutical regulations, a group of barrier method latex devices have been unused in the fight against AIDS, STD’s and also unwanted conception. There are still no barrier methods available for herpes and genital warts, which happen OUTSIDE the area covered by male condoms.
One of these latex barriers, the Great Barrier Brief, got a National Institute of Health GRANT during Clinton administration, and successfully completed that clinical trial. and can be seen below with Spring 2015 updates.
That panty condom for women was called JANESWAY during the clinical trials at CALIFORNIA FAMILY HEALTH Council. Both contraceptive and prophylactic /disease preventive benefits can be so reassuring for mothers since women can’t take hormonal pills when nursing. EVEN THOUGH a National Institute of HEALTH GRANT happened during Clinton Administration, the BUSH administration issued the GAG RULE on day ONE of the reign of repugs and millions of women died around the world. How much of this GAGGING is still going on, we don’t know. We do know that the NIH FUNDING GUIDELINES were demoted /lowered so that there is no funding for protection for women, and little for contraception.

By making the GREAT BARRIER system subject to CLINICAL TRIALS, which MALE CONDOMS never went through, the access of women to protection was severely restricted and there is NO BARRIER PROTECTION for anyone outside the area covered by male condoms.

The plan of the small group of women still involved is to organize licensed collectives worldwide run by trained volunteers. The volunteers would be given latex barriers for their own use and to give away or sell for no more than 2% MARKUP or two PENNYs per barrier over costs. So each ordinary person volunteering becomes a self-designated distributor. Any collective licensed and using the manufacturing standards could ship worldwide. No corporations would be licensed to avoid profit making in reproductive health worldwide by NON-HUMAN entities. Sponsored /lowered costs would help lower birth rates worldwide and could help prevent physical and mental damage of abortions today.

This situation must be clear to media and public alike!
No media in the USA including NY Times Washington Post SF Chronicle have said a word about this, though all been asked to address this situation numerous times since 1984. Most media have advertising contracts with Big pHARMA corpse-porations that prohibit bad press. No government officials have stepped up to champion the rights of the people! 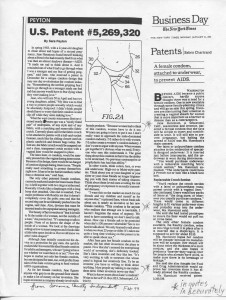 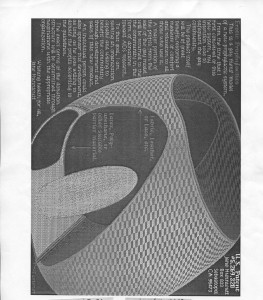 FACTS today: Men have no options, Women still have NO PROTECTION beyond talking men into male condoms, so…. once people know about this cover-up, talk about a BRIDGE SCANDAL???? We organize and create licensed COLLECTIVES and make our protections ourselves. We share latex with those we love. So the only way is to make them and share them with everyone YOU think is sexxy….

WOMEN can create cultural breakthroughs about the red-taped regulation-raped, black-balled panty condom just by mentioning it to any friend who has herpes. Horrid statistics, over half our younger generations have this problem. WE WOMEN will mention GREAT BARRIER Brief system in news, on every media channel, tweets , television, social media, dating sites, public service announcements etc.

Every step of the journey of each manufacturing collective will be celebrated by mutual affirmations.

No more corporate mark-up on our private lives!!!

**more on licenses below.

per Gilda Radner via Roseanne Roseannadanna===>>

Why do they call it PRIVATES when it is everyone ELSE’s business ??? 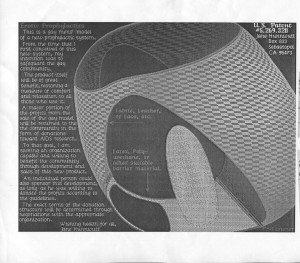 REARGUARD needs some spokespersons. Strong gay leaders could champion a collective that would start with their friends….or corporations could sponsor a collective for their employees in large companies. REARGUARD licensing will not have price ceiling but must provide basic solid protection at 2% just like women’s protection. Let’s get EVERYONE protected, OK?

No corporate licenses to manufacture will be issued for the latex portion, aka the vaginal liner,of the Panty Condom, to avoid others making profits from women /sex!!! Panty making corporations CAN GET a license to make the panties, and latex manufacturing equipment manufacturers CAN get a license to make the mandrels needed for the dipping process Both these will need to work closely with the latex making collectives, so that the latex shapes are correct, and the panties fit and function are standardized for that manufacturer.

Collectives with a license can also make their OWN STYLES of panties or string version, whatever is culturally appropriate, worldwide. Sponsoring corporations could combine facilties for the volunteer’s childcare for addition corporate benefits. The point of these restrictions is that WOMEN while being 52% of world populations, are paid at least 25% LESS THAN MEN and in addition, have no barrier methods of protection, and must BUY MALE CONDOMS and expensive chemical contraception with side effects. No more corporate mark-up on our private lives!!! Let’s honor the true costs of sex and caring for children and make the costs LESS so people get covered MORE!!!!

*** NIH STATISTICS are predicated on WHO SURVIVES with CERTAIN MEDICATIONS in a CLINICAL STUDY approved by the manufacturers of the chemical treatments. No one tally doctors’ reports at all. THEREFORE it’s nearly impossible to tell how many women had it and died, uncounted, nor the percentage of children in California schools w/no mother. Women get all STD 20 to 200 times easier than men.

PS MEDIA and RESEARCH persons: Please understand that the centre 4 dis-ease OBSERVATION does not control disease. The reporting changed, so no actual women’s deaths are reported UNLESS they are using some HIV medicine IN a STUDY. So the statistics look like “GAY MEN” caused this problem, fueling haters everyday, and the women continue to die….. uncounted.
PLEASE help get this to women everywhere…. If you can form /fund a collective to manufacture these, you can get the license to begin. Everyone chooses their own level of participation in collectives, and $$$ used.
Example: A real estate agent rents an old dental laboratory, and a builder remodels it for required Good Manufacturing standards.
Their good deeds for the community serve as marketing for their own enterprises, as the community organizes around the collective efforts. Any concerned citizens purchase equipment and donate it, while some use their volunteer status to provide prevention education with free samples that they earned. Each volunteer becomes a self-directed distributor of education and prevention. Mark-up is 2% MAXIMUM.
WHO CAN HELP do this on other continents?
WOMEN On EARTH TODAY need to know that they can begin making protection themselves! VERY LOW disease and unplanned pregnancy when used.
MAKE it LOCAL, use it local.

Invented in 1984 — Let’s manufacture in 2014 !
NOW maybe we all see this perfect example of the Permaculture principle: The PROBLEM is the SOLUTION……!
What caused the problem? Political power/corporate greed
Without the PROBLEM, what IS THERE is the solution!
practical private local-made /homemade protection
Invented in 1984 — Let’s manufacture in 2014 !     The first collective will be world famous — let’s make a poll and guess who will be first.
Womens organizations and media have been asked to address this situation numerous times since 1984. Most media have advertising contracts with Big pHARMA corpse-porations that prohibit bad press…. thus no articles about womens needs, unmet! It would be bad for BUSINESS.

Our promise to you...

If your style is classic, athletic, or wild,
If your size is large, medium, or small,
There will be a JANESWAY . . . . Made in colors to enhance you.